The government borrows from the public credit. Parliament has given themselves this power, as expressed in the Australian constitution Part 5 Section 51 subsection 4 “Borrowing money on the public credit of the commonwealth:”. As subsection 2 of the same Part & section also provides themselves with the power of “Taxation but so as not to discriminate between states or parts of the state” : plus recent statements of the 2014 Liberal government that taxpayers will have to help pay the federal governments “budget deficit” plus other statements such as “the government has no money due to taxation revenue falling” etc. All this proves that the working, producing taxpaying public provides all the money for Governments.

Governments now have banking for the issue of Treasury Bonds, as the taxes will cover the bond or other securities & paper issued.

Private Banks have an extra ability to construct their loaning process, whereby for each deposit that flows from making loans they keep a reserve amount from each transaction, the result being that an initial loan of say one thousand dollars will provide thirty thousand dollars, this would be the case if the “ratio” of reserves to deposits. Loans or assets & liabilities was 30 to 1.

The above mechanism or ratio is called “fractional reserve banking”, although there are times that this ratio may not involve a reserve amount at all in Australia. The value therefore of the taxpayer backing of the said “treasuries” is increased to many times the original value by the Private Banks, profit is derived by the Private Banks charging interest upon the whole amount of the principle produced by the multiplying or gradually reducing the reserve amount as progressive loans are made on a given loan “ratio” structure.

The “created” amount of increased money is loaned back to the taxpayer or borrower including the governments, all will have debt & interest applied to the principles of every loan amount, upon payment the principle of the loans is reduced to zero, only the interest is kept as profit, that is often two to four times the amount of the principle.

Explaining the fractional reserve banking; for example money from nothing.

The process of the creation of credit, is based upon fractional reserve banking, a means whereby a private bank can multiply its deposits, as deposits are also loans, the process involves the multiplication of money held as deposits, to amounts of thirty times or more the amount deposited within a private bank.

This method of banking exposes a flaw in human nature exhibiting elitist thinking from the days of slavery; it is a childish flaw exhibiting the inability to share aligned to a desire to own and control by means of a fictitious debt, on a multiplication of deposits held, increasing bank capital, upon which interest is charged as if the increased amounts based on creation of credit belonged to the private bank.

This practice has caused wars, destruction of environments, sickness, fear, and anxiety; it is caused by an institutionalized and legalized fraud, played out today in the debt plagued derivative stacked casino, of western world Junk Credit loan Banks, who have thanks to deregulation have become speculator banks.

This system now entering its dying days on the way down , and has plotted and planned, to take all from the countries allowing them to operate; planning for the reign of terror as they fail again, are tactics like “haircuts”,  “bail ins”,  “bailouts”, “austerity”, “liquidations”, “depressions” , and nation destroying “economic migration”.

All of the above will be dutifully supported by “the rule of law”, made by our toady political lackeys, hopefully ensuring themselves of a taxpayer paid a nest egg, while soothing the ruffled feathers of  the disparaging  public, assisted by mainstream compliant media outlets.

This part is a recent reintroduction development in banking. It is used when Private Banks need to increase balance sheets and profits due to poor consumer demand or a “downturn”, it involves the Private Banks selling off the residential mortgages it holds to third, fourth or fifth parties, (without telling the borrowers in Australia). The activity is called a “derivative”, going through a process of “special purpose vehicle”, then on to fund managers & investors anywhere in the world, slices of the mortgages are sold, the bank involved will act as agent keeping the account connected to the borrower. Derivatives are risky it is speculation in debt, often involving subprime, low doc, or no doc loans, unemployment increase can crash the Derivative market which is huge, at present $21 trillion in Australia. 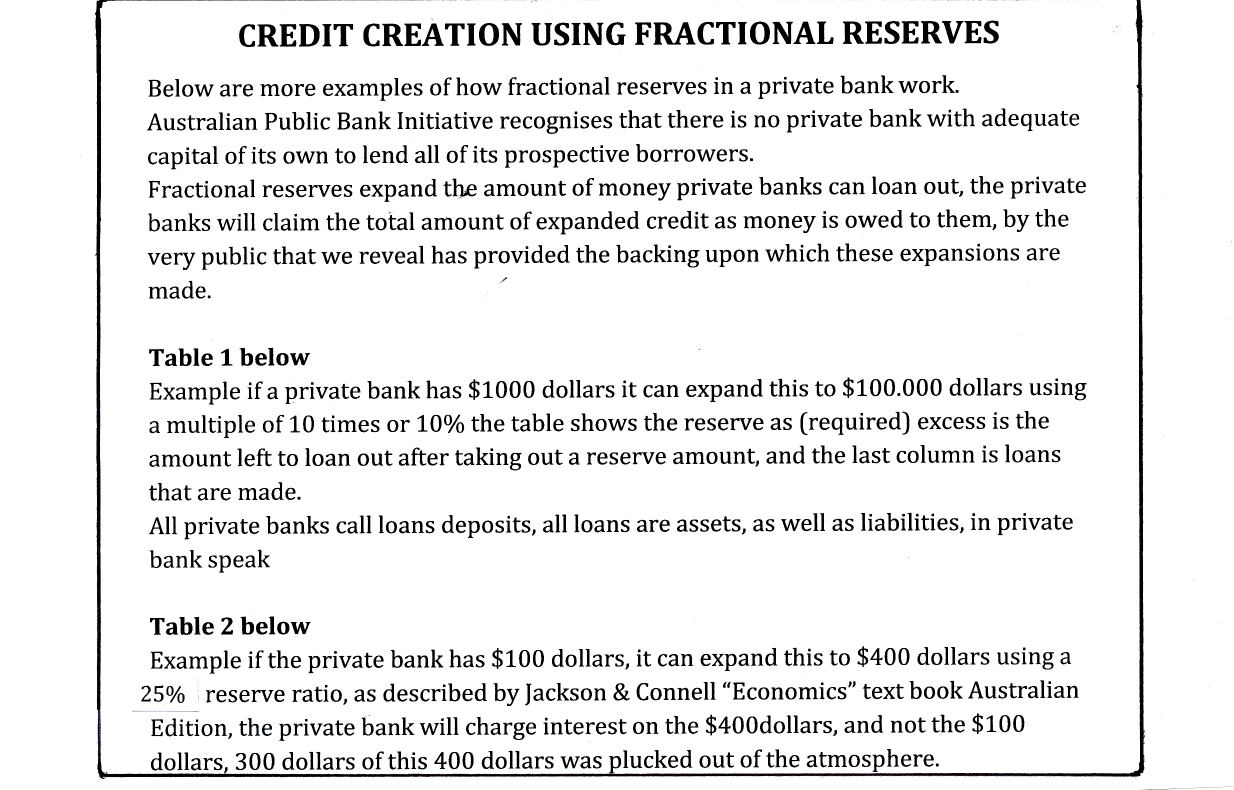