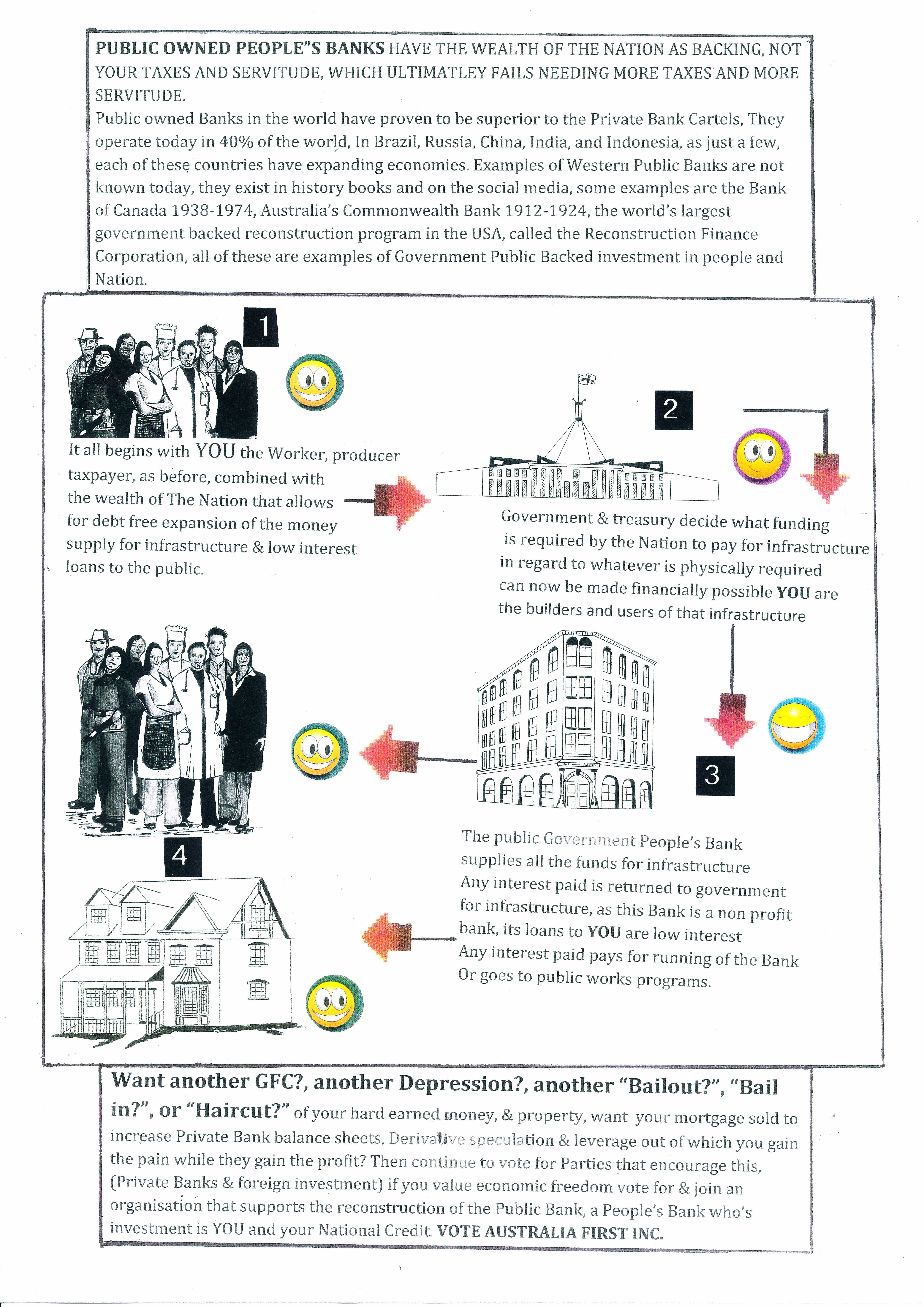 How National Credit Banking Would work: For a National People’s Bank

BANKING: the simple provision of money services involving the management of the rewards of human efforts in the building of a civilization, based on the use of a unit of exchange such as notes, coin, and loans.

Also banking is,the provision of the means of exchange of goods and services, based on a universally accepted money supply, by a community for the payment of debts involving ease of transfer of goods, services, and cognitive advancements.

Where a banking system extracts a profit for this effortless provision of the means of exchange, it distorts the fundamental values of all commerce and trade, while lowering the reward for effort to the borrower, producer, and consumer by the amount it costs to pay the fabricated debt.

This activity also erroneously imparts a value within the unit of exchange, whereby banks that operate this way will say they own as a debt to be paid extra, as if the money was rented out by them with interest.

But banks have no money, except for a tiny amount of equity, shareholders’ funds, and property, so where do all the big fat profits come from? It was the borrower.

What is not recognized by this type of banking is that it is the borrower who has always provided the means for the provision of any loan, and without the borrower having backing and income to repay the bank, it would not have benefit of any new money as all loans to customers is new additional money.

New money private bank did not have!

Please check out the latest economic view on money creation at the Bank of England website, quarterly bulletin Q1 for 2014, where the bank explains that new money is created by any private bank making loans, thus deposits create loans = money.

From a national credit perspective or via a causal understanding of credit creation, we would see that if any bank had no borrowers, for any given period of time, it would have no deposits; that would not allow this Bank to increase its balances.

When a borrower did arrive he/she brought with them an asset, income, or an ability to pay over time the provision of credit, created by the bank and is called a loan, that the borrower has agreed to repay by contract.

At the time of a loan that bank, or another one, now has a deposit depending on what the borrower did with this money; say, he/she paid a builder and the builder put most of the money in another bank, that receiving bank now has a deposit of that amount; the first bank also has an asset and liability, the second bank has an unsecured credit. In both cases, the private banks say they own the money created or deposited in each bank.

A national credit bank providing public credit in contrast, places ownership of the credit created to the borrower, and will only charge an amount that it costs to run the bank; thus, there is no large portion of the loan constituting of interest, as that bank knows the money created was on the borrower’s ability to pay, the borrower’s credit, or public credit.

Ownership is important for a national credit bank, as for example if a farmer borrowed for a crop and a fire destroyed it, this kind of bank can write off its loan as this loss was not a fault of the borrower, or the bank, there is no requirement to make a profit to pay shareholders, or to buy additional capital from another bank, as the distribution of the National Credit comes from the Nation’s total activities being monetized and owned by the public.

Also any loss to the farmer is also a loss to the nation, there is no need to extract a payment to a public bank that is not benefitting the national credit, and therefore the nation.

The backing or the collateral for a national credit bank lending capacity is the whole nation, all resources, all innovation or invention, all land use, all ideas that progress the nation, all of this is monetized when required, improving our national economic wealth..

So, in the case of a national credit bank, both the bank and the credit created as loans belong to the people for better or worse, but managed for better where possible by human activities, involving the public, government, and bank

How will a National Credit Bank be administered to do its duty?

The duty of a national credit bank is to make, “what is physically possible financially possible”, depending of course whether the purpose of the credit is in the national interest; with this in mind government must be able to provide the infrastructure and services needed and required by the public.

So, we have government having the statistical means to decide what is needed to build up modern infrastructure with regard to the above statements, as there is no debt accumulation nor need for extra funds; there is no need for foreign investment which is another form of outside control, and debt bondage; laws regarding the preservation of all National assets to be owned by the people of the Nation, will be required to preserve the assets that would back the national credit bank.

The bank itself must have greater autonomy and conduct all government finances for the whole country, as it is owned by the people; government does not own any part except to use the bank on behalf of the people; there will be no budget debt or surplus as it will have to be always in balance; programs for expenditure are to be equally decided by both bank, and government, including the people, in a public forum used to hold both government and bank to account.

An effective way to ensure the bank is fully accountable to the public, would be the introduction of an immediately accessible free court of Financial Arbitration, with division of powers from both bank, and government, provided for the public to get full redress of any concern about abuse of power, regarding bank or government, this court be given the power to sack any person, where a public petition has demanded it, and a judgment has found agreement. If appealed a new public petition holds sway.

This should apply to all government posts, including prime minister. Why such laws? The preservation of the national credit is the most important and powerful tool a nation can have, especially for the public, prime ministers come and go, and in many cases go they should.

As these provisions talk about the almost unlimited ability to expand the money supply, the credit to the public, the infrastructure required, the homes for people on a rent to buy national scheme, the jobs required to engage this nation building, free from debt, the people must have a greater say.

How a National Credit Bank will reduce debt and redistribute any debt incurred, therefore making it a debt free bank.

At present, Australia has a climbing public and private debt in the trillions, while governments pretend that the Federal Government deficit or surplus is the all important factor, it may be for them, and yet national gross debt is the real problem.(Refer to the Australian Debt Clock)

The issue of the public’s money should match what the people of Australia want to achieve, together as government, and people, using our national natural resources, the value of which would constitute many times the required money supply at any given moment in our national development, without growth in debt that requires excessive growth just to pay debt as it is now.

Provided our people do not want to spend money on space projects that would produce no significant improvement in the standard of living for all, or expand our gambling houses to send those besotted by it broke, we can improve our roads, trains, agriculture, manufacturing industries, water, and energy supplies.

With reference to the three pillars of economy: water resources, energy and banking, all of which have at present in our history been subject to privatization, or subjected to foreign control, all arranged by our media promoted luminaries, the politicians of all establishment elitist stripe, including  economists.The Bank of England in 2014 Quartlerly Bulletin states that the economic textbooks are wrong about the source of money, also.

Debt will be seen as a means of adjusting the expansion and contraction of a required amount of money for the nation, as it is charged in the course of issuing public credit; any debt payment will be redistributed into future infrastructure projects, or added to improvements to existing infrastructure.

In many instances interest upon loans redistributed will act as tax payment, and taxes will also act as encouragement to use the public credit money, as it will be the only currency with which to pay taxes, or fees and interest, all proceeds from fees, tax, or interest, charged are redistributed back into infrastructure, none of it remains a debt, nor will it accumulate more debt.

Taxes are used to retract part of the money supply which has funded public   infrastructure, to prevent inflation, the type of tax used would be a financial transaction debit tax, public bank interest is also to be used to adjust monetary policy, there is no debt overall as all payments go back into the nation building system.

Even the payment of taxes can be reduced, as debt repayment upon government loans will not exist; taxes today are in many instances used to pay for foreign loans to either other countries or global banks, or other transnational corporations, regarding a people’s bank, taxes, fees, interest, can be reduced to nothing, as these actions are used only to control the ebb and flow of debt free money, without inflation or deflation.

People who think that our national credit policy could not work are not aware that 40% of the world uses the same methods like China or Japan, writing off debts or issuing debt free loans, and to add insult to injury our politicians have just signed up to a “Free Trade Agreement”: to a country that has its own banks while our politicians have sold off, one by one, all of our public banks progressively after 1980.

The hidden history of National Credit and Public Credit Banks

One great example of the power of a public bank investing in the nation is to be found in the history of the so called “new Deal”, in America, 1930 to 1945 this was for all intentional purposes a public bank example, although it was called The Reconstruction Finance Corporation.

The USA was dead broke from the failure of private banks leveraged investments, the government spent 50 billion dollars into the economy, launching America into a   powerful economic country of the world, where in the 60’s and 70’s this economic advancement was still evident, and every penny was repaid from public profits, the country today has again slipped back into the private bank debt ridden nation it was in the 1930’s.